Back in summer 2019, Robert Icke’s The Doctor had a clutch of five star reviews, Olivier nominations, and a sell-out run at The Almeida. Does this covid-delayed West End transfer feel as fresh and provocative, post-pandemic, as it did back then? And is Juliet Stevenson’s turn as the stubborn and severe protagonist, Professor Ruth Wolff, quite as good as it felt two years ago? The answer to both questions is a resounding yes. Impeccably executed stagecraft, inspired writing, and a terrific central performance fuse into a remarkable and revelatory piece of theatre.

The bones of The Doctor come from Arthur Schnitzler’s early 20th century work, Professor Bernhardi. Hospital director Ruth Wolff (known as Big Bad Wolf to the less overawed of her colleagues), has under her care a dying 14-year old, victim of a botched self-induced abortion. The girl’s Catholic parents despatch a priest to the hospital to offer last rites. Wolff, determined to facilitate the girl’s peaceful death, refuses entry to the uninvited cleric. Voices are raised and a conflict ensues. Surely, she later assures sceptical colleagues, her actions are those any doctor would take. But does unyielding attachment to the sanctity of medical ethics mean she has lost touch with the needs of a modern, diverse world?

Wolff and her colleagues find themselves at the centre of a social media firestorm. Spurred on by Twitter trolls and the warriors of identity politics, opinions harden. The public begins to take sides. Within the hospital, long-standing competitive resentments emerge. Antisemitism rears its ugly head and political battle lines are drawn.

Wolff’s fatal flaw is her rigid attachment to a fixed set of beliefs about what being a doctor means. This mindset blinds her from seeing how tensions around gender, racial justice, and religion add potent complexity to what, for her, is a simple decision about ethics. The doctor finds herself presented with a stark choice on which her future hangs: offer the grieving parents an apology or stick to her guns. What is at stake is a life’s work, and more importantly, a proud woman’s integrity.

The Doctor is really two plays in one. Each adds texture and depth to the other, even if occasionally the storyline feels busy. The first is a cleverly articulated exploration of medical ethics interwoven with a commentary on medical hierarchies (we soon learn why plain-speaking Wolff labels her scheming co-workers “witches in white”).

The second is about the caustic effects of extreme identity politics on modern institutions. Icke deliberately casts actors in roles that would normally be given to a different sex or colour. Characters only reveal what race or gender they are when the facts emerge in the twists and turns of the narrative. It is a clever kind of wrong-footing that keeps us consistently on our toes, re-evaluating each individual’s motivation and experience as new information about their identities emerge. It is thought-provoking too. The arrogant refusal by a white doctor to permit a visit, and the characteristically dismissive form of language she uses in doing so, takes on an entirely different (and darker dimension) when we learn that the priest is black.

When a defensive but belligerent Wollf appears on a TV panel show she must explain her actions. But it is not in her role as doctor she is called to account. The questions she confronts relate to her status as cis-female, white, privileged, and Jewish, and the way these identities bias the words she uses and her behaviour towards others. She is on trial here by groups demanding retribution for longstanding injustices, and by way of implication, so is the audience. This is, in the doctor’s own words, “a public hanging for the digital age”.

Icke’s interest as a theatre-maker is not in taking sides in an ongoing debate about what some newspapers like to call ‘wokeness’. Indeed, the sense here is more of a writer trying to find a way of bringing people together, one that accommodates seemingly incompatible belief systems. Hildegard Bechtler’s slowly revolving set means we quite literally get to see all sides in the many ins and outs of well-structured story. The writing is fastidiously fair to all sides. Icke never lets Wollf of the hook for her miscalculations and, at its heart, this is a story of hope.

Stevenson offers a towering performance as the gruff, naïve, and sporadically intolerant doctor whose world collapses around her. An onstage presence throughout (including at the interval) her character finds comfort at home with a partner Charlie (Juliet Garricks) and in a quasi-maternal connection with a neighbour’s vulnerable teenager Sami (a delightfully quirky Matilda Tucker). Neither is quite what they seem, but both have something to say about the person the doctor really is.

The Matchmaker – From Venice to London 2023 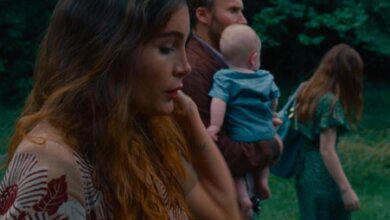 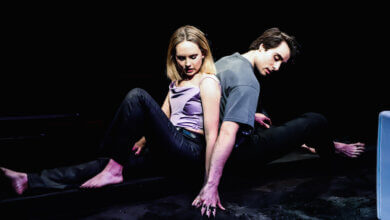 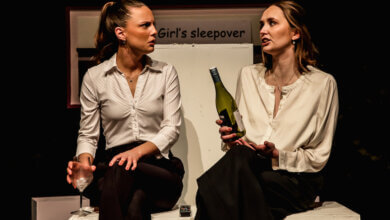