How many opportunities are there in life to see a one-woman clown cello show? Not many perhaps, but if the idea appeals you could do a lot worse than making a beeline for Karen Hall’s enjoyably quirky one-woman show, Delusions and Grandeur.

Aside from a highly successful career as a professional cellist, including four seasons of TV’s comedy-drama Glee, Los Angeles-based Hall has, pardon the pun, plenty of other strings to her bow. Musician, actor, comedian, clown, and writer, she can also perform the tricky feat of eating an entire Subway sandwich on stage without missing a word of her monologue.

While there are some agreeable comic moments, it is mostly the serious side of the performer that is on show on Delusions and Grandeur. The deeply personal piece comprises a series of reflections on the nature of the relationship a musician has with her art, interwoven between short and exquisitely played extracts from Bach’s Cello Suite No.1. The feel is rather like sitting in on an intense and revealing psychotherapy session, accompanied by music, with the audience in the role of analyst. It sounds like it ought not to work, but it mostly does.

Hall’s love-hate relationship with her music comes across most evidently in meditations on the sacrifices a musician makes for her career. These include the 40,000 hours of practice and performance that leaves the performer feeling like the cello is physically attached to her; the astigmatism that results from always having one eye closer to sheet music than the other; and the feeling that without the music that defines her, everything else in life would lack meaning or purpose.

Although the show aims for a tone of confessional intimacy, there are occasions when the performer’s musings on life as a musician on a hit Hollywood show feel a little guarded, or at least over-curated. Perhaps this is down to the obligatory LA non-disclosure contract she talks about, or a genuine desire to keep some things to herself. Either way, there is occasionally a feeling that Karen Hall the actor is playing a decidedly expurgated version of Karen Hall the cellist.

Anticipate a fair bit of audience interaction. The aim seems to be to invite contemplation on experiences shared between performer and onlooker. It may work in a stand-up routine but in this type of more serious work it comes across as a time filler. A little more from Hall and less from the spectator would be welcome. 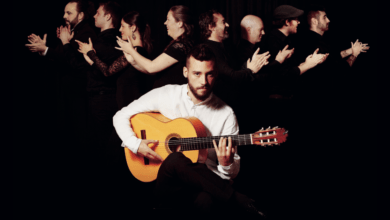