“He puts the hell into hello”. When Clyde Barrow met Bonnie Parker at the beginning of 1930, a legendary criminal duo was born. 90 years later, Frank Wildhorn, Ivan Menchell and Don Black’s musical arrived in London for a concert performance, a decade after the musical Bonnie & Clyde premiered on Broadway. Now performed in a fully staged production for the first time in the UK at the Arts Theatre with several of the same performers, the gun-toting lovers are ready to Raise a Little Hell.

Stranded on a country road, waitress Bonnie Parker enlists the help of petty thief Clyde Barrow to fix her car and the pair quickly fall in love. She has movie star aspirations, he wants to be the next notorious cowboy-hero, but Clyde and his brother Buck are in and out of jail. Escaping a brutal prison regime, Clyde crosses a line and, desperately in love, he takes Bonnie with him. Revelling in their Robin Hood-fame, the lovers find themselves on borrowed time.

This musical version of Bonnie & Clyde doesn’t have an illustrious history with only a short run in New York and a cult soundtrack meaning few people have ever seen the piece as a fully realised production. Nick Winston has retained several cast members from the concert version in January and makes a pretty convincing case for restoring the reputation of the show. It has depth in its lead characters and a blues-meets-country-meets-Broadway score wrapped around a dramatic story about the price of love that asks whether you should scale down your dreams.

Rare for a musical theatre piece, it is Ivan Menchell’s comedic book that is most memorable, particularly the witty conversation between the ladies gathered in Blanche Barrow’s hair salon who relish the freedom that imprisoning their husbands has brought them, and in Blanche and Bonnie’s snarky exchanges. In fact, it is the female leads who emerge as the more rounded characters – Bonnie aiming for Hollywood and seeing the glamour in Clyde while Blanche reaches for a smaller contentment in a quiet life and maybe a family with Buck. Both dreams have consequences for the women, and it is their perspective that creates the show’s pathos.

Clyde and Buck are a little flatter by comparison; there is a brotherly bond, a context of economic hardship and a determination to live differently to their parents, but First Act Clyde is little more than rash and angry. Things develop quickly in Act II, however, and the brutal experience of prison changes him. There is eventually far more substance to Clyde, reflected in the music he is given.

Wildhorn’s score is wide-ranging but harmonious. It leans more towards the love songs like How ‘Bout a Dance, You Love Who You Love and That’s What I Call a Dream but there are some strong rock numbers in there too like Raise a Little Hell, while the context pieces like Made in America set the scene for economic depression and a crumbling American dream, reflecting the desperation in Clyde words “freedom is something I’ve got to steal.”

Frances Mayli McCann is an excellent Bonnie, simultaneously romantic and practical while placing her incredible vocals at the heart of the show. The musical may be a bit light on Bonnie’s conversion from law-abiding citizen to gun-toting bank robber, but Mayli McCann’s charismatic performance holds it together. Jordan Luke Gage has less to work with but grasps the bigger opportunities presented in Act II to draw out Clyde’s motivation, the effect of his second prison term in hardening his character and his devotion to Bonnie, landing the powerful numbers well. But its Natalie McQueen you’ll remember, her comedic Blanche is funny and warm but full of soul, desperately trying to save her husband from himself and breaking your heart in the process.

There are imperfections here, a subplot about a local Sheriff in love with Bonnie makes little contribution to the story, Act II overeggs the reprises and it could perhaps take a lesson from Thrill Me: The Leopold and Loeb Story in losing some excess numbers and subplots to make this 2.5-hour show a little leaner. But audiences have waited a long time for this musical to reach the West End. This is a production that does much to restore the show’s reputation. So sit back and let Bonnie & Clyde steal your night. 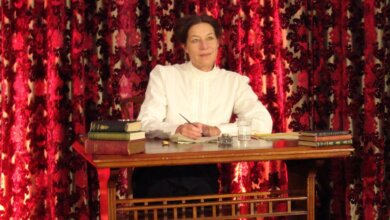