WNO celebrates Beaumarchais’ money-loving, conniving rogue in its episodic spring tour Figaro Forever where Rossini and Mozart’s classics are joined by the world premiere of Langer’s sequel in which the scoundrel gets a divorce.

Opening with Sam Brown’s take on Rossini’s The Barber of Seville, Nicholas Lester is centre stage as Figaro, the ubiquitous rascal with a finger in every pie. His more than capable tones are a delight as is his impeccable swagger and his red trousers shine even more than his presence.

Bang on the money is baritone Andrew Shore as Doctor Bartolo – a tremendous performance both vocally and theatrically. The avaricious old buffer is easily cuckolded, his bluster is fun and his rich tones apposite.

As ever the Chorus impresses while young James Southall controls the WNO Orchestra tightly keeping the tone light and frothy to match the romp above.

Ralph Koltai’s simple set comprises a multi-purpose wardrobe and two large distractingly part-transparent and part-reflective panels which are rather too often turned for no apparent reason.

With little substance in the plot, Brown has chosen to bulk out the piece with colour – barbershop singers in myriad stripes, floral housecoat-clad Monty Pythonesque,rolling pin-wielding harridans, luminous yellow wellies and sou’westers, and a glittering silver scissor dance reminiscent of Busby Berkeley synchronised swimmers – and oh so much slapstick.

It is really pure pantomime: fart jokes, Keystone cops, slo-mo punch-ups, fab guide dogs behaving and misbehaving, hiding in grand pianos, and more. A mixed bag but undoubtedly better than a night in front of the TV. 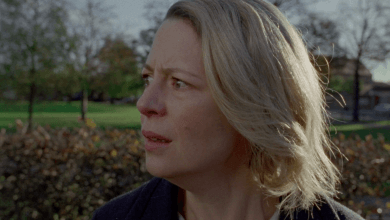