The years between 1974 and 1979 saw two general elections, both in 1974, a Government lose its slender majority and face two votes of no confidence, as well as the Prime Minister resigning the post two years into his term, and the rise to power of the person who became the most divisive political figure in modern Britain. Add to this, she achieved leadership of her own party in a contest she was never expected to win, having been put up as a stalking horse by supposedly more heavyweight contenders. This may sound like a lot of history to try to cram into two and a half hours. Perhaps the biggest mistake that writer James Graham made was thinking it was possible to do.

The first act comes across as a mix of trailers for an eight part BBC drama series, and an attempt to tell the story of five years of political history in the style of the Reduced Shakespeare Company. The decision to base the action in the offices of the Whips is a good one. This is where the power brokers hide, where the deals are done, and where political careers are made. It also means that the focus of the play can be narrowed done to the negotiations that went on to either bring down or maintain the Wilson/Callaghan Government. However, it is not enough to overcome the problem of capturing such an interesting period in a relatively short time frame.

Everything and everyone is reduced to a stereotype at best and a caricature at worst. The Labour Whips are all decidedly working class, with a range of northern accents and a cockney thrown in for good measure. The Conservative Whips and everyone who comes through their doors are all incredibly upper class. But it doesn’t end there. A character called the Colonel seems to have been modelled on the Major from Fawlty Towers, and the depiction of Labour MP Audrey Wise as well as the wife of another Labour MP could have been taken from a book of working class comedy characters. Like the storylines, the characters are never allowed time to develop.

In one instance the treatment borders on offensive, as John Stonehouse, the MP for Walsall North who faked his own death, seems to be turned into a Rowan Atkinson style comedy character and then some kind of prophet who maybe knew that parliament could kill you when other MPs actually do start dying. In between these moments, his apparent suicide as he disappears into the waters off Miami, is accompanied by a rendition of David Bowie’s Rock and Roll Suicide. It’s crass and insensitive, both to Stonehouse and Bowie, considering the latter died in the year the play premiered and the inclusion of this and Five Years smacks of opportunism and bandwagon jumping.

There are moments where the play hints at the potential within the storyline, notably in the closing scenes where Labour Whip Walter Harrison, played by James Gaddas, and his Conservative counterpart Jack Weatherill, played by Matthew Pidgeon go beyond political posturing and become more rounded characters that you can start to sympathise with, but for most of the play the surface of the period or people are barely scratched.

In the programme notes, Graham talks about the parliament of period being the most dramatic that many people can remember and says he hopes he has done it justice. Sadly, he hasn’t.

Does not do justice to the subject. 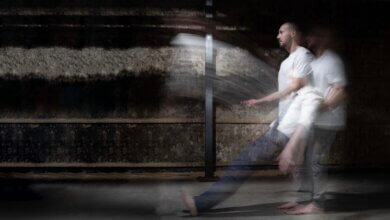