The first thing to say about this production of The Wizard of Oz is that it is non-traditional. In many ways that can be regarded as a good thing, and theatre is all about pushing boundaries and experimenting, but this feels

like it’s trying just a little bit too hard to bring itself out of the ordinary. As a result we have some changes to the soundtrack – out go some of the traditional numbers and in come a few new ones written by Andrew Lloyd Webber and Tim Rice. We have motorcycling witches, and we have projection, which works with varying degrees of success.

Leading the cast as Dorothy is Georgina Onuorah. Onuorah brings her own interpretation to the role, and she approaches her vocals well. Of course, almost at the top of the show she has the iconic Over the Rainbow to tackle, a deceptively difficult number which brings with it a lot of pressure to deliver, and she rises to the challenge with aplomb. Jonny Fines is a suitably loose-limbed Scarecrow, contrasting well with Paul French’s stiff and awkward Tin Man. Lion is played by Giovanni Spanó with a nice feeling of slight disappointment, not least when Dorothy says that Scarecrow is her favourite. All three are in good voice when it comes to their vocals, though they don’t get that much to sing – not least because Lion’s big number If I were King of the Forest is one of those songs that have been removed, which is a shame.

Dorothy has, of course, a fourth companion and that is her dog, Toto. Here Ben Thompson threatens to steal the show as the dog’s puppeteer. He brings a very realistic feel to his canine companion, with tiny twists and tilts of the head, a look. You see him happily trotting along, or sitting, or snuggled in Dorothy’s arms. It’s extremely well done and very well-observed.

Christina Bianco is a pink and fluffy Glinda with a nicely evil Ellie Mitchell on as cover as The Wicked Witch of the West / Miss Gulch.

Some of the scenes, particularly at the begging, seem a little rushed and if there’s anyone in the audience who’s not familiar with the story they may struggle a little to understand some of the backstory. They’re almost treated like incidentals, as though the ambition is to whizz through the Kansas scenes as quickly as possible so we can focus our efforts on the spectacle of Oz. The result is the show starts off in a bit of a confused blur, compounded by the intentional blur created by the Twister projection, that leaves you landing in Oz feeling a bit shell-shocked.

Once we arrive in Oz things settle down somewhat, and a refreshing version of Munchkinland greets us. The Witch’s lair (here Witch HQ) is high-tech, which combined with a dystopian wasteland of the woods creates a feeling that we’ve drifted accidentally into We Will Rock You. Projection starts working at its best here too, in creating semi-static backdrops complete with some amusing puns and references tucked away in some of the signage.

This is a show that will divide opinion, and a lot will depend on whether or not you appreciate the changes and the approach taken here. There’s no doubt there’s a lot of good stuff going on, and some good ideas, but there’s also some things that you won’t necessarily appreciate – especially if you’ve come to the theatre expecting to see a show you know and love from the film. 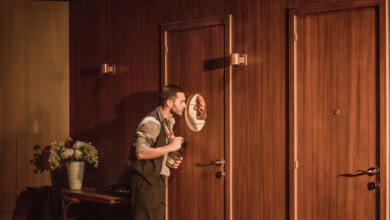