In our fourth preview of LGBTQ+ shows at this year’s VAULT Festival, we thought we’d devote this week to some queer comedy that is being shown this weekend. Richard Maguire talked to creatives behind The LOL Word, It’s Britney, Bitches, and Mr. Henry Moss: Quadruple Thre4t.

The LOL Word needs little introduction; a regular at both Edinburgh and the VAULT, the crew of queer women and non-binary people have also performed at Soho Theatre and on London’s Southbank. Chloe Green believes that part of their success is down to the safe and inclusive nature of their shows. “You won’t hear any rape or mother-in-law jokes at our show’ she confirms. Indeed, it was that sort of humour that led to The LOL Word being established in the first place. They were fed up watching comedy that had misogynist and homophobic punch lines and so set up their own evening instead.

Last year at the VAULT, The LOL Word discussed prom night, the school evening dreaded by young queer kids worldwide. This year the theme is coming out and the performers will mine their own lives remembering how they came out to friends and family. Chloe says that a good deal of the laughter from the audience comes from recognising the issues and the experiences that the comics share. That’s not to say that the audience is 100% queer either: many of the situations described on stage will be relatable to most people. The LOL Word has such a following that their first night is already sold out and tickets for their other shows, including a 2 hour spectacular, are selling fast. You better get in there quick.

The creatives behind It’s Britney, Bitches also draw on their own experience; this times as superfans of America’s pop princess. For a year, performers Clare Gorman and Jonathan Ashby-Rock have waited outside Britney concerts talking to people and asking them what Britney means to them. Some of the stories are funny, others are quite moving such as the one when a young boy aged 7 or 8 told them about asking his parents for a Britney doll, but receiving a drum kit instead. There are, like The LOL Word, coming out stories too.

And like the LOL Word, It’s Britney, Bitches was a hit in Edinburgh, despite the fact it was one of the last shows of the night. Jonno says that they performed to full houses, and on one night, in true Edinburgh style, to a single American tourist. This year’s show is a bit different from Edinburgh’s as the Britney story keeps changing, helped undoubtedly by YouTuber Chris Crocker who in 2007 made a video called “Leave Britney alone’ after the media delighted in Britney’s lacklustre performance at the MTV Video Music Awards. Crocker is still an avid Tweeter, now with an explicit XXX to his name, and some of his more recent posts may work their way into the show, which otherwise features lots of Britney songs and even an audience dance-party.

Also singing a Britney track, in his show Quadruple Threa4t, is Henry Moss, sorry, Mr. Henry Moss. Nominated for Best Comedy at Brighton Fringe 2019, his show is a satire on both the entertainment industry and the self-help world. Set up like a Ted Talk, Henry hosts a series of motivational workshops led by questionable celebrities such as Krystal Lee, who is adamant that she is responsible for Kylie Minogue’s success. As this is a one-man show, Henry gets to play each character, and each one sparkles.

He’s also a good impressionist and we can expect to hear him being Judi Dench and Britney (again), and the show will also feature some musical theatre classics such as As Long As He Needs Me from Oliver. At Brighton Henry’s show was at the end of the night, but this time he’s playing in the afternoon, a slot that he welcomes as it allow him to see the other shows at The VAULT. It also gives him time to work on the show he is producing, 1&Only, which appears later on in the Festival. Henry promises that Quadruple Thre4t promises to be the campest 50-minutes of your life!

So if you are after some queer lols this week, it may be wise to head on down to the VAULT Festival. But hey, to misquote Britney, it’s your prerogative!

It’s Britney Bitches is on 23 February and 1 March

Mr. Henry Moss: Quadruple Thre4t is on 22 and 23 February 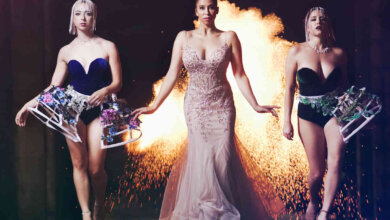 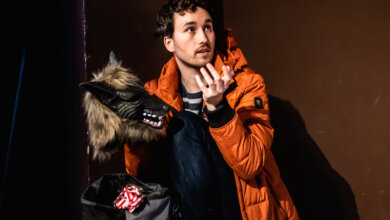