Hot on the heels of its original run at the RSC’s new outdoor theatre in Stratford, Phillip Breen’s contemporary presentation of The Comedy Of Errors, comes to the Barbican for a more weather friendly winter run.

One of Shakespeare’s earliest plays, it’s the, frankly, ludicrous tale of two sets of identical twins accidentally separated at birth – Antipholus and his servant Dromio from Syracuse and their respective twins, raised in the city of Ephesus, coincidentally, also called Antipholus and served by Dromio. The play covers a 24-hour period where, for the first time ever, the two sets of twins are in the same city at the same time. The Syracuse pair end up in Ephesus without knowing that it’s the home of their twins.

As the Syracuse pair travel around Ephesus and are wrongly mistaken for their Ephesus counterparts, a series of increasingly wild and farcical mishaps happen that lead to various fights, beatings, seductions, theft, and even accusations of madness and demonic possession.

In Breen’s retelling, the story moves from the Greek city of Ephesus to an unnamed Middle-Eastern or north African town and bought forward to a mid-1980’s timeframe. There appears to be little change in the text, so the updating of the setting seems whimsical, at best. At worst, it’s given the designers free reign to dive into some of the more questionable fashion choices of that decade.

The story is farfetched by anyone’s standards and while the cast throw themselves whole heartedly into their roles, the overall feeling generated is one of mild amusement and slight embarrassment. Unexpectedly, the more contemporary setting highlights the sheer nonsense of the story. With modern dress and setting, there’s a prospect of more subtlety and nuance that is expected with modern theatre. Unfortunately, not here. Whilst there’s power in Shakespeare’s words, the story comes across as a very poor vehicle for his words.

The direction doesn’t help either. Whilst there are some light touches and nuances dotted throughout, and some amusingly reimagined scenes, the overall direction is played very much on the nose. As the action starts to develop in the first act, as the Syracuse pairing start to engaging with the locals, the performances are rapidly dialled up to 10 and, from there, they never let up. This results in a hugely over the top series of performances that results in a final act becoming an unpleasant hysterical melange of shouting and flailing.

The cast too seem a mixed bag. Rowan Polonski (Antipholus of Ephesus) and Jonathan Broadbent (Dromio of Syracuse) shine in their roles and manage to bring some degree of control to the increasing chaos. Guy Lewis (Antipholus of Syracuse) and Greg Haiste (Dromio of Ephesus) feel like comparatively timid alongside their twins. The two leading ladies in the production are equally unbalanced. Avita Jay (Luciana) lacked the vocal gusto to be effective alongside the increasingly cacophonous ensemble and Naomi Sheldon’s (Adrianna) portrayal of y confused wife comfortably tapped into the feeling of exasperation that much of the audience must have felt.

Overall, this Comedy of Errors has missed the mark. It has some interesting ideas, but none are fully realised. The modern setting and costume rather than bringing the play up to date, makes the narrative feel very dated; to quote Broadbent’s break-of-character moment in an ill-judged stand-up scene, “give me a break, these jokes are 400 years old!’.

This production is unlikely to bring the play or Shakespeare any new fans and is very likely to frustrate established fans. 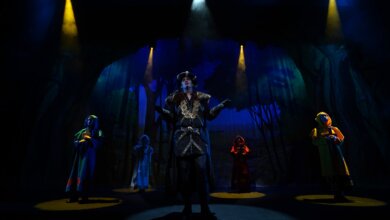 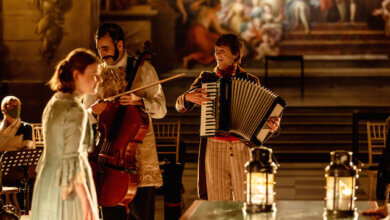 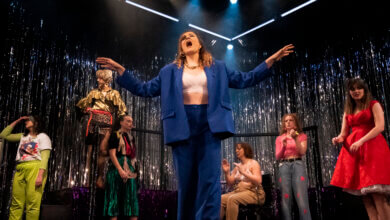 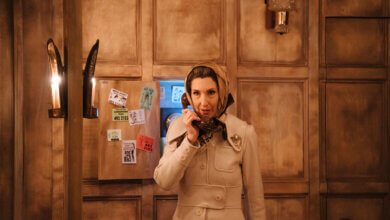