On Behalf of the People began as a commission from the National Coal Mining Museum and followed its performance there with a short tour. Now The Melting Shop has put together an impressively lengthy tour of mostly one-nighters, covering nearly 20 venues in Yorkshire (from theatres to church halls) and forays into Lancashire and Derbyshire. And the play and the production are in very good shape; if anything, it has gained a keener theatricality without losing the unforced authenticity which is one of its great strengths.

The title tells us what is the main focus of the play: in 1947 notices were posted at pits saying, “This colliery is now managed by the National Coal Board on behalf of the people.” The play begins in 1945 with Victory in Europe and Labour’s landslide election victory and runs to the early 1950s and the first green shoots of the affluent society.

A second viewing makes even clearer the skill with which Ray Castleton knits together the personal and the political. He produces some powerful monologues but is also adept at making ordinary people’s conversation touch the bases of the great political issues of the time. Tom Mason returns from war, with experiences behind him that have re-shaped his view of life. His father George, still working underground, but increasingly afflicted by emphysema, has two problems with Tom: he doubts his whole-hearted commitment to the union and he blames him, unreasonably, for the death in Normandy of his favoured elder son. The two women in the family reflect the changing attitudes of the time: George’s wife, Connie, is a strong character, but only in terms of supporting and controlling her menfolk, whereas Liz, Tom’s girlfriend/fiancée/eventually wife, looks to have her own independent life.

The family story is simple enough, with slow healing of wounds. Tom gets on; George gets ill. But, in its presentation of the issues of the day, it is far less simple than it seems. George’s political speech at the 1945 election and Tom’s statesmanlike re-statement of a miner’s priorities in the face of absenteeism after nationalization are totally effective, but best of all is the intense, even-handed debate between George and Liz on the union’s treatment of strike-breakers.

If anything, Kate Wood (Connie) and Lizzie Frain (Liz) have sharpened their performances and the splendid Ray Ashcroft is still everyone’s father/grandfather as the heroically stubborn George. The only newcomer, Danny Mellor, brings real authority and intelligence to the part of Tom. All, with subtle skill, bring out the changes in the characters in comparatively few years, the maturing of Liz and Tom particularly impressive.

The central character, however, is the fictional small town on the “right side” of the Pennines (that’s the east) built on, and by, coal. The “This is my town” sequence, poetic and yet down to earth, that begins and ends the play is perfectly presented. At the end the pride and optimism from the standpoint of the 1950s are genuine; we, the audience, have to supply the irony of 1984 and all that.

The simplicity of presentation is integral to the play’s impact. A few chairs and a table are enough. Cast members race to whiz them on and off or drop garments or props in the corners of the in-the-round staging – audience members have to be careful not to plonk their chairs on a discarded coat or hat. The divide between actors and audience is blurred as the ailing George Mason sleeps in his comfy chair in the front row or Tom finds volunteers to look after his presents for his parents. 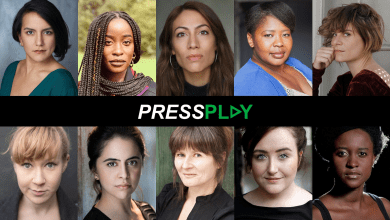 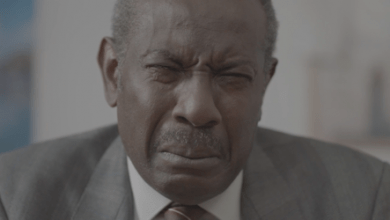