What do you get if you cross family friendly Disney classic Mulan with raunchy cabaret club Moulin Rouge? An incredible immersive theatre night at The Vaults in London!

The Huns are coming and poised to attack. Mulan, trying to save and bring honour to the family name, decides to go and fight their way to freedom and take their father’s place in the war by disguising themselves as a man. Drafted out to Paris, along with their fellow commandeers, they wind up at the Moulin Rogue club, surrounded by glamorous go-go girls instead of gruff generals – a different kind of front-line. With Mulan fighting to hide their identity as well as feelings for the irresistible Ginger it proves to be quite the journey.

Writer and director ShayShay has ticked every single box with this hilarious, dragtastic parody of two classics. Merging both storylines is a stroke of genius – this shouldn’t work, but it does without a shadow of a doubt. The artists on stage burst the narrative into life and captivate the audience with every witty pun and exaggerated mannerism. The musical interludes are another touch that elevate the script and make you want to jump on stage to perform with them. Whether they’re shimmying around to the classic Lady Marmalade or swaying along to Can’t Fight This Feeling with the audience brandishing the candles from their tables in the air it’s a performance that brings everyone together.

While the entire ensemble is fantastic, Sigi Moonlight playing Mulan is an absolute treasure. Faultlessly portraying the main character, the stage is dominated by their presence and talent. Interacting with the audience comes to them with ease, quickly reacting on the spot like the pro they obviously are. General Lee played by Hannah Maxwell is another perfect counterpart. Ridiculously over the top, they have the audience in stitches every single time they grace the stage.

As part of this three hour spectacular, you can also add on a meal, served during the show, which comprises of four delicious courses from Flavourology, it’s worth doing. Starting the evening with tofu lettuce wraps and baked Camembert or cauliflower dip is a delight to the senses, simple food with a gourmet twist. The main course of lamb shoulder or butternut squash ribs is good hearty grub and definitely welcome after belting your lungs out to Kylie songs along with the artists on stage. Finally, delight your sweet tooth cravings with the charred pineapple on crispy kadaidi pastry and strap in for the shows magnificent grand finale.

Mulan Rouge has everything you could want from an immersive experience – a great set design, tasty food and a brilliantly talented cast all coming together to present an exceptional evening. 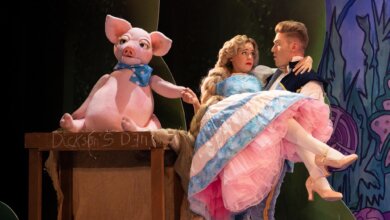 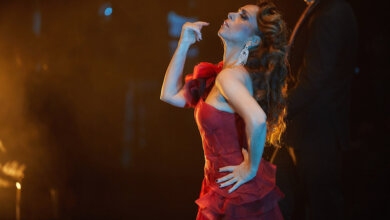 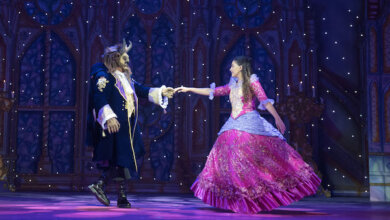