Latitude Festival hasn’t even kicked off in earnest and yet already has seen one of the highlights of the festival. Hot Brown Honey, direct from Australia, bring a show that is similar in vein to the late night cabaret/burlesque/circus works that have become hot tickets in recent years and add a touch of hip-hop, a dash of fury and a  frisson of capital ‘P’ politics to the mix.

It is sexy and funny, fierce and just a little bit filthy. Yet its key point is clear-  in a festival where the left is out in force and its possible to get quinoa from one of the many food vendors- it asks its audience to examine its own privilege. Can you go to any city in the world and easily find your makeup foundation? Would you think twice about calling the police?

Yet the joy of this extraordinary work is that however deep its politics get, the sense of party never fades. The energy generated in the theatre tent could provide enough electricity to power the festival through to Sunday night.

The structure of the evening is straightforward even if the execution is complex. The six-strong cast takes on stereotypical cultural roles and then subvert them. In the works most arresting scene, a reverse strip tease takes place as a Lisa Fa’alafi clothes herself in layer upon layer of green leaves while a male voice-over in the background patronisingly discusses Polynesian fashion dressing everything in green. The Western gaze looks at something other and simplifies it. The exotic is never complex.

This is just one of many scenes to thrill and subvert.   We have burning beatboxing from ‘Hope one’ Haami dedicated to all the beautiful women in the audience, a rendition of It’s a Man’s World from vocal powerhouse Ofa Fotu dressed as a gollywog doll and an aerial act from Crystal Stacey that takes sexual violence as its start point and weaves it into a  sensual, violent tug of war.

Early on the work quotes that the single story creates stereotypes and the problem with stereotypes is not that they are untrue but that they are incomplete. Hot Brown Honey give us another side of the story. Extraordinary.
Reviewed on 13 July 2017 | Image: Contributed 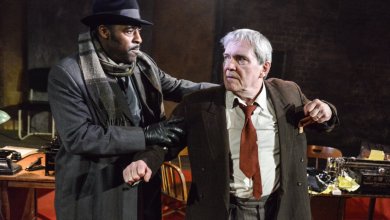 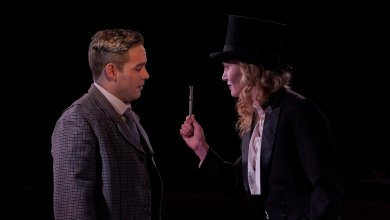 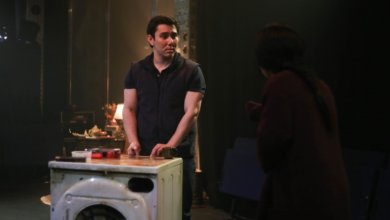 Four Play – Above the Stag, London