Well, that’s one way to spice up a family holiday.

In the midst of a particularly awkward family exchange, Hilary’s BFF, aging performer Frances (Kerry Peers), decides to debut her new routine: a sultry burlesque that she hopes, in her heart of hearts, might just win her the attention of the recently-divorced Roland. Instead, the family – and the audience – are treated to the world’s most uncomfortable seduction, a landslide of spastic gyrations and comic falls, a libido as burst as Frances’ glitter-filled balloons.

April De Angelis’ Jumpy is a consistently entertaining, raucous affair, full-to-overflowing with moments like this. Its two acts rarely lag. Another funny scene involves parents Hilary and Mark overhearing their daughter’s escapades in the next room; then, of course, there is Hilary’s brief apprenticeship under Frances, which features a maid costume and a rather awkward exchange with a feather duster.

But all kidding aside, Jumpy is also quite an insightful play about growing older, particularly as a woman. Hilary, a wife and mother approaching fifty, rendered in vivid Technicolor by the fantastic Sara Stewart, is dealing with a marriage grown stale, a funding withdrawal that threatens her job, a mean-spirited and sexually overactive teenage daughter, and, in a more general way, the creeping feeling that age has robbed her of more than just rosy cheeks and ache-free joints, but of her usefulness as well. As her marriage stumbles and her daughter Tilly, played a little too convincingly by Charlotte Beaumont, becomes almost unmanageable, Hilary’s ill-ease with life begins to overwhelm.

April De Angelis’ genius is in the effortless accuracy of the characters she writes. Any parent of a teenager will immediately recognise Tilly and her moody, hyperbolic modes. And anyone who has hit middle-age will know that helpless feeling that sometimes infiltrates: that some things, simply, are just lost for good. It is characters like this, characters that speak to experience, that help this genuinely funny play become more than simple entertainment. But, likewise, it is restraint – that willingness not to pursue to deeply some of these questions, or to spiral out too wildly into the theoretical of women’s rights and gender inequality – that keeps the show entertaining.

And entertaining it is: Theatre Clwyd’s production of Jumpy is a romp. Polly Sullivan’s sparse, multi-tiered set provides multiple staging platforms to help ensure the action is always mobile and fresh. Scene and costume changes, likewise, are enjoyable affairs, cleverly choreographed by John Ross to take full advantage of the sundry entrances and tiers. And the performances are all very strong. It is not only Stewart and Beaumont who deliver, but the entire cast across the board, though a special mention should be given to Peers who, on more than one occasion, almost steals the show as Frances.

This is a lively, dynamic production of a very well-written play. If, as they say, life is too short, then Jumpy is time well spent. 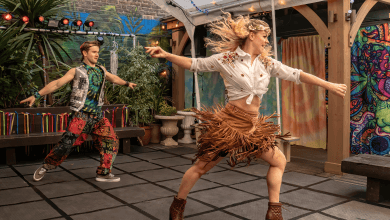 The Boss of It All -New Perspectives Theatre, Soho Theatre 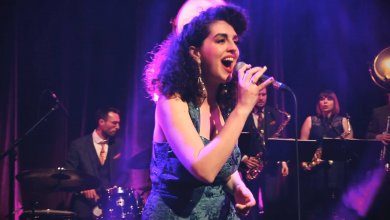 Down for the Count Swing Orchestra: Swing that Music – Lawrence Batley Theatre, Huddersfield