Produced by Belgrade Theatre in association with Tamasha and Yellow Earth Theatre, the world premiere of Amy Ng’s new play, Under the Umbrella storms into Coventry this weekend for a two-week run ahead of a UK tour. Nicole Craft caught up with Amy just before a rehearsal run to find out more about her inspirations for the story, the challenges of appealing to such a varied audience and the representation of actors of East Asian descent.

Although British-Hong Kong herself and quite familiar with Chinese culture and traditions, Amy says that this is actually the first play that she’s written using somebody else’s idea. Approached by producer Lian Wilkinson back in 2015, the pair began discussions around Lian’s idea of having a play about marriage markets in China. Once Amy had discovered what it was that was driving Lian – who is Chinese but adopted by a British family and whose mother was also a Chinese adoptee – the position of women in China became the main focus of the play, with Lian very aware that neither she nor her mother would have been put up for adoption if women were valued more in China.

It would be easy to assume that the idea of “desperate middle-aged parents meeting up to try and hawk their daughters out” was an outdated concept that is dying out, but the marriage markets are only just reaching a 15-year anniversary in 2019 and are very much a modern invention. Interestingly, Amy points out, despite the ratio of men to women in China being around 118:100 now, women really don’t have their pick and it’s often the successful, independent, professional females who find themselves being hawked because the “fear of well-educated and strong women is so strong among men… and the strength of that prejudice that is still so skewed in the men’s favour even though there are so many more men to women. That’s quite amazing”.

Not wanting to make a play that’s based in the UK all about misogyny in China, and taking into consideration Coventry’s growing population of Chinese students, the angle became more about exploring the ways in which potential partners are valued in each country – with Tinder being compared to a UK version of a marriage market, albeit one with slightly less serious intentions initially, perhaps – and the idea for a mature Chinese female in Coventry sharing her university life with an English female best friend and the two comparing their respective takes on relationships, or lack of them, was born.

Setting the play in Coventry didn’t just feel appropriate because of it being a Belgrade Theatre production, Amy explains. Coventry has quite a specific concentration of Chinese students but has always been quite a working-class town; “so when all of a sudden there were these snazzy new buildings being put up in the middle of town which were all accommodation for rich foreign students that were quite overwhelmingly Chinese, that was generating some tension. That’s a really interesting back story that you wouldn’t get setting the play somewhere else.”

Despite both telling quite a controversial Chinese story and being set in the UK, Amy says the play isn’t especially directed at either audience, rather just something she hopes many people will enjoy. “I really try not to write plays that educate people”, she laughs, “it cripples me as a writer if I feel like I have to explain my culture so I’m really hoping we’ve created a play that’s universal. The theme of a family desperate to get their daughter married off is quite universal…and there’s a lot for people to assess”.

Of course, Amy hopes that the Chinese community will come and see the production too – despite her being asked why they should pay for a ticket to see something that’s just an ordinary, everyday story to them (her reply being “because it’s going to be funny!”) – and to help with this a budget was set aside to translate the play into simplified Chinese subtitles using local company Talking Birds’ accessibility app, The Difference Engine, which Amy says she is delighted about using. Having previously resorted to printing off a scene-by-scene synopsis in Chinese for one of her plays, which was almost impossible to read in the dark, she’s excited about using this technology and thinks it will make a huge difference in the numbers of Chinese people coming to see the play; hoping, also, it will help reach out to the wider Chinese community in Birmingham and the surrounding areas.

Under the Umbrella isn’t a straight up and down drama piece and Amy knew right from the beginning they wanted quite a physical production with a lot of dance and movement and this is certainly reflected in the casting. “Three of the four actors have Lecoc or Gaulier backgrounds, so big French drama schools that start off with mime and physical comedy… one of them even has circus skills”, she says. “Obviously we wanted the three Chinese characters to be played by East Asian actors, that goes without saying, but on top of that, we were looking specifically for people with those skills. At one point we were thinking of puppetry as well so we do have a puppeteer, but then we kind of used the budget on puppetry on something else”, the latter point being made with a shrug and a laugh.

In addition to the Chinese parts in this production being played by East Asian actors, Amy is very clear that she wants to address the under-representation of actors of East Asian descent in theatres in general and welcomes discussion on the reasons behind this. “It’s a vicious cycle”, she says. With very few plays that are East Asian centric directly linked to the proportion of good East Asian actors available for casting at any one time, it becomes a bit of a chicken and egg situation. Amy does note that there are efforts to increase the intake of actors from East Asian countries at drama schools which is an obviously starting point although, she points out, the balance is still tipped towards East Asian women, to the point she has just had to change the gender of a character in another one of her plays for ease of casting.

Also believing there is some truth in East Asians being something of an invisible minority, Amy attributes some of the lack of community ‘neighbourhoods’ among British-based East Asians to the lack of concentration in where the Chinese tend to settle. “Because [the Chinese] have been mostly in the restaurant and catering business, they try not to settle too close to each other because they don’t want to cannibalise each other’s business, so they do tend to be quite scattered.” A combination of all of this, the added censorship issues around writing plays in China and the lack of theatre-going culture in Chinese communities in general certainly contributes to the overall issues of under-representation.

Talking of the set Amy thinks it’s going to be very beautiful, although she’s only seen a dolls-house model of it so far. With the choreographer very much covering the stage with fabulous dance and the background designed to look like shimmering Jade, it should be a “thing of beauty” to witness. Finally, when pressed for a comment as to what message she would send to anyone on the fence about buying a ticket, Amy responds, “I think it’s a good night out…it’s funny…entertaining, thought-provoking and it’s probably more fun than just sitting at home and watching Netflix!”.

Under the Umbrella runs at The Belgrade Theatre from Sat 2 March until Sat 16 March 2019 and then tours. Tickets and more information available here.
Nicole Craft | Image: Contributed 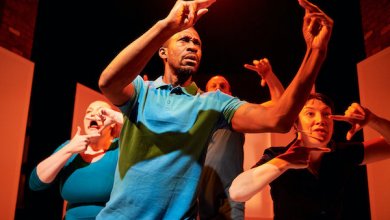 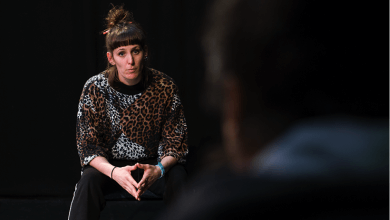 The VAULTS Festival is back!

The Bodyguard – The Alexandra, Birmingham