In French films, prostitution always seems like an empowered career move, and as with Belle de Jour and Priceless, the high-class escort is a glamorous and sympathetic figure. But this is reserved for nice middle class women because in French literature poorer women fair less well – Victor Hugo noted the poverty of women is worse than a man’s and the progress of Fantine from happy lover to abandoned mother and prostitute is a relentless one.

Josephine Mackerras’ new film Alice follows takes the former view as a decent young wife finds herself in an impossible dilemma with few options. Married to the handsome Francois, Alice seems to have it all, a devoted husband and doting father to their son Jules. When her card is declined in the pharmacy, Alice discovers an astounding financial deception as her husband disappears with their savings. Almost penniless, facing eviction and with a family refusing to help, Alice follows the trail to a high-class prostitution service where she accepts a job to save their home.

There is a gritty quality to Mackerras’ picture and despite its potentially salacious frame, it is a story that is primarily concerned with household finances. Throughout the film Alice looks harassed and worried as she struggles to earn enough to pay the bank and she must calculate a sufficient hourly rate with plenty of clients to account for the 30%-40% deductions her ‘manager’ will take. The economics angle is a surprising one, but the audience is constantly reminded that Alice is doing all of this to save her family.

The moral dubiety at the centre of this film is one that Mackerras largely side-steps, her perspective on prostitution is that it is Alice’s choice and her body, while her encounters take place in swish hotel rooms with clean-looking men with massive bank balances who rarely require her to do anything more than lay down and think of France. That is the nice thing about high-class prostitution, it can still be quite dignified without the protagonist having to get too mucky – not something poor Fantine experienced when having sold her hair and teeth, a passing wag shoved snow down her chemise.

At times, Alice also plays like a rom com, with the heroine learning to be self-sufficient and emotionally strong while going for liberating bike rides and boating trips with prostitute-friend Lisa, who mentors the shy housewife while dreaming of higher education somewhere rural. It’s hard to know what point Mackerras is making and, when the movie takes its third twist into Kramer vs Kramer territory, both parents have behaved so badly it is hard to believe that the French equivalent of social services wouldn’t take poor little Jules away from the pair of them.

Emilie Piponnier is a likeable Alice and as her world falls to pieces the audience feels the ramifications of the shocking deception. As the story unfolds, it is enjoyable to watch Alice grow in stature as the job gives her confidence and stability, managing the light comedy of her encounters with nonchalance, while the burgeoning friendship with Lisa (Chloé Boreham) is credible. Although it is not always believable that a faithful and downtrodden wife would take so easily to prostitution, Piponnier is a sympathetic lead that you want to root for.

The role of Francois, Alice’s husband, is entirely two-dimensional however and follows a far too obvious path, from betrayal to contrition, suspicion, jealousy and ultimately violence. Martin Swabey is given only meagre tools in the script and any depth or complexity his character might have developed is stifled. Mackerras has tried so hard to make him the villain that it divests the interactions between Francois and Alice of any real jeopardy, he did after all fritter all their money away on high class prostitutes, leaving him with bizarrely self-aware excuses about the pressures of fatherhood and being a modern man – well, boo hoo!

Alice is not a bad film, and for the most part it rattles along fairly well, although it does tend to repeat conversations or scenarios, eking out the running time to a slightly overlong 1 hour and 45-minutes. And this is a heroine you want to like. If only women in French films didn’t fall so easily into prostitution as the magic solution to sudden middle-class penury and an unbelievable stepping-stone to a better, fulfilled and more feminist life. 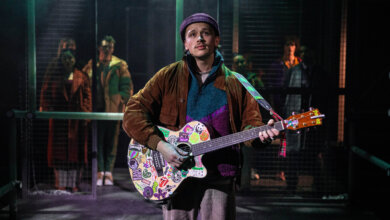 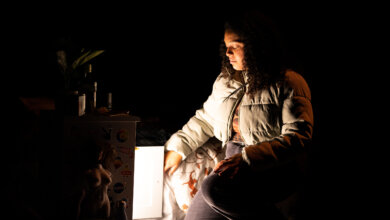 Patricia Gets Ready (for a date with the man who used to hit her) -Brixton House Theatre, London 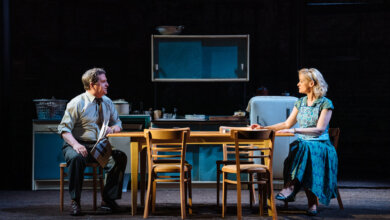