Music: Vincenzo Lamagna after the original score of Adolphe Adam

Akram Khan’s retelling of 1841 Romantic ballet masterpiece Giselle – a co-production with Sadler’s Wells and Manchester International Festival – was first seen in Manchester in September 2016 to instant acclaim. It was Akram Khan’s first full-length commission for a ballet company and what may have seemed like a bold choice at the time – he had previously collaborated with the English National Ballet to create Dust, part of their WWI commemoration trilogy Lest We Forget – now seems like the perfect marriage of good judgement and inevitability.

Khan does indeed reinvent the ballet, while remaining true to the original narrative. The setting is

however dramatically and excitingly reconceived. Pastoral Rhineland villagers are replaced with migrant garment workers (the Outcasts): the factory closed, now exiled outside the factory walls. The noblemen and women who join them for harvest festivities are now with the less-benevolent factory Landlords: distant and elaborately attired, in stark contrast with their simply-dressed former employees. In the second act, the tenebrous woodland realm of the Wilis – the ghosts of disappointed and vengeful brides – becomes an eternally-nocturnal factory haunted by the ghosts of tyrannised factory workers.

This updating gives the piece a striking and unexpected currency but Khan leaves the politics there. The portrayal of the inequality of wealth and power and social injustice is left for the audience to consider. Khan instead moves on with the narrative. Tim Yip’s remarkable designs for set and costume gives the entire work a timeless and uncertain sense of period and place that keeps it balanced finely between realism and dream world: a darkly bleak, dystopian urban future-past.

The music has been similarly reimagined by Vincenzo Lamagna, who has created a new score of electronic noise, disturbance and disturbia that tunes in and out of Adolphe Adam’s original score, keeping the lovely melodies almost intact when it matters. Gavin Sutherland orchestrated the score and his skilful orchestral leadership of the English National Ballet Philharmonic sounds magnificent and cinematic in delivering this thrilling mix of new and old. The other significant element in the score is generous use of near silence – sometimes accompanied by an ominous electric hum or the almost inaudible fluttering of near-motionless pointe shoes. This creates almost unbearable moments of emotional dread.

Last of the design elements is Mark Henderson’s lighting, which is a masterfully-subtle shifting wash of darkness and near-light, and the occasional significant punch of colour. The lighting almost buzzes with the sound and perfectly illuminates the scale and detail of Yip’s monumental set. The entire effect is painterly and touches every detail and movement with the perfect amount of illumination or blackness.

Khan’s choreography is still a revelation. The ballet technique that underpins the company so strongly is unconcealable but Khan mostly avoids ballet positions and conventions, using large groups and repeated motifs to illuminate the narrative. Khan regularly creates movements throughout that recall the massive spinning mules of the textile industry, emphasised by the machine noise of the score. Only the three leads are given anything like ballet solos or pas de deux.

The outcasts are characterised by wonderful new-urban folk dancing and sinister lupine running. The landlords are given no dancing, instead moving little so encumbered they are by costume and status, but still scattering the outcasts at the slightest glance. The Wilis are transformed from wilting spirits – beautiful as they still are – to strange and sinister weaponised insectoid creatures full of danger: so tall en pointe, draped with loosened hair and ragged dresses that they appear to almost hang, except when they drop, spiderlike. They drift from and back to the darkness with a sombre and terrifying beauty.

Tamara Rojo – Artistic Director of the company and still one of the Principal Leads – makes a devastatingly powerful Giselle. Feisty and defiant, her quiet presence makes it inevitable that Albrecht and Hilarion would single her out from the outcasts for their attention. Her love for Albrecht and disdain for Hilarion are writ clear and the emotional core of her performance is shimmering. Her final pas de deux with Albrecht is heartbreakingly melting yet spirited.

Khan has switched Albrecht’s duplicity with Hilarion, although both betray her ultimately – Albrecht through weakness and Hilarion through ambition. This makes more dramatic sense than the classic version. James Streeter brings a sweet nobility and emotional weight to Albrecht. Guest Lead Principal Jeffrey Cirio is a revelation as Hilarion: duplicitous, provoking, animalistic and unmistakable. Stina Quagebeur as Myrtha, Queen of the Wilis, continues to amaze with her sinister, imperious yet compassionate elegance.

The audience applauded after the first section in the usual ballet style, but then didn’t applaud again until the end of the first act. They stood at the end of the second act. Collectively they knew they were in the presence of something new and game-changing; something that entirely wrapt their attention and moved them deeply, for this ballet does that.

The extraordinarily beautiful and impressive design elements, the powerful new-old score, the impetus of the reworked narrative – which has so many contemporary resonances that dispel the cosiness of traditional ballet – and the focus and quality of the principals and glorious company make Giselle an unforgettable night of contemporary ballet that grips, devastates and hangs in the air even after the curtain falls on the lone figure of Albrecht, exiled from love and life: just a handprint on an unforgiving wall. 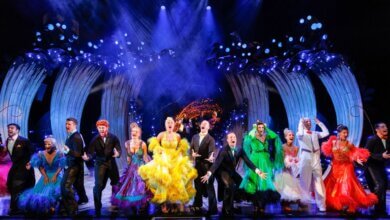