If you are a big fan of Sondheim then this production of Company at Aberdeen Arts Centre is a must. If you are a big fan of the less radical and traditional Broadway style musical, then take a great big breath before wandering into what will at the very least be an extremely challenging environment. It’s Bobby’s 35th birthday and all of his married friends are wondering why he is avoiding that matrimonial state. Yes, he has lady-friends galore and yes, everyone adores the man; but why won’t he cross that final threshold and join them in matrimonial bliss? Well, the answer becomes clear, well fairly clear, during the course of the action.

Set, apart from a single use of a touchscreen mobile, in 1970’s New York any semblance of what might ordinarily be called a plot is absent from this production. As the story-line wanders freely across time-zones it soon becomes clear that the word flashback, or for that matter flash-forward, has no place on this stage. Described as a series of vignettes, not in any particular order and bravely plotless; Company is just that. A visual and auditory experience it certainly is and perhaps, just perhaps, the vignettes offer a reasonably comprehensive look at the morality of that state we often term marriage.

Robert is played somewhat awkwardly by Oliver Savile and for much of the action it is difficult to view him as the lead. A veteran of Wicked and The Navigator he only really comes to life when under the influence. Yes, there is that under-duvet sex scene and yes there is that allusion towards a bit of Brokeback Mountain between friends. But, in the event, the themes of seduction are barely explored and the relentless hammering of the marital bliss theme remains the central focus. OK, Harry (Alex Wadham) and Sarah (Jaqueline Hughes) open Act 1 with a rip-roaring karate match after which the reality of him being on-the-wagon and her being on the food-trolley is hilariously exposed in full view of the soul-searching Robert. And again, the various vignettes which follow, explore a wee bit of divorce, some rank promiscuity and some fairly constant substance use. But in the big scheme of things these issues are nothing to write home about and, aside from that karate bout, no one really gets hurt throughout the production since – yes, you’ve got it – marriage sure is worth the angst.

In some ways the production resembles a flat-lined patient in ER. Not much happens until a series of electric shocks are applied after which things get interesting for a short while before more of the same needs to be administered. In the case of Company, the highpoints happen after a few drinks or a few spliffs or, as in Act 2, after a few lines of coke have been imbibed. Then the action finally heats up. During the cocaine scene Robert finally takes control as the manic ringmaster lording it over a furiously excited cast. Then, inevitably even that high wears off and he drifts back down to the mediocrity of will he or won’t he take the plunge.

There are some powerful musical numbers. Joanne (Anita Louise Combe) punches high with The Ladies Who Lunch and Marta (Simbi Akande) equalises with Another Hundred People. But, all in all, sound quality on the night made for challenges. In particular the shrill New York accents played havoc with the sound system and dialogue was at times pretty difficult to make out.

Staging was pleasantly minimal with the work space extending far out into the stalls and lighting was stylishly appropriate although more spot-focus on the central character might have been a benefit.

Company is certainly worth the watch despite mainly resembling a confused collision between a stylish musical and a ponderous essay. In many ways it resembles a road traffic accident at the junction between Broadway and Plato Avenue. Sondheim’s musical intrudes into reality and concludes that there are really no easy answers to the conundrums. There is of course romance and there is a muchness of pain. The sheer hard work of making marriage work is explored endlessly until poor Robert is finally bludgeoned into making a life changing decision.

Is Sondheim’s Company bravely plotless or simply neurotically disorganised? It’s hard to decide and only the man himself would have a definitive view. As for this production, there are a few nuances needing knocked out; not least that dreadful sound system. As for poor Robert? Well, after those endless debates and a total of three birthday cakes it was hard by the end of the proceedings to really care whether the poor man got himself hitched or not. 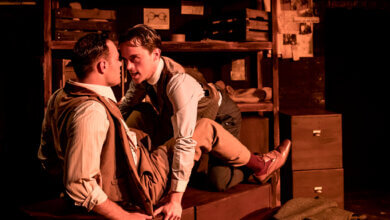 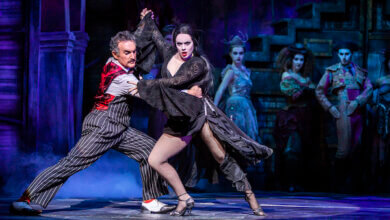