While the 2016 Brighton Fringe does not officially kick off until Friday 6 May, the bank holiday weekend saw the return of the Only in Brighton! walking tour to the city. Run by blue badge tour guide Ric Morris, the tour takes in the city’s main sights, while offering interesting tidbits for locals and visitors alike.

Sunday evening’s tour group was made up entirely of local residents, which Morris explained is usually the case during the Fringe. Perhaps inevitably, the tour begins at one of Brighton’s most popular and most photographed sights, the stunning Royal Pavilion. Finally completed in the 1820s, the building’s exterior in an English take on Indian architecture, while its interior is filled with Chinese art and furniture.

Morris explains that the building has had a chequered history. While gazing at this magnificent building, one would assume that it had always been admired. However, for most of its history, the pleasure palace built for George VI (who statue is also a stop on the tour) was criticised as ugly and compared unflatteringly with a London cinema. Thankfully, that is no longer the case.

The next stop is Brighton Dome; once a stable for sixty of the king’s horses, it is now a leading arts venue made up of three different auditoria. I, like many other Brighton residents, already knew of its place in pop history as the venue where Abba won the 1974 Eurovision Song Contest with ‘Waterloo’. Morris added some additional amusing detail, including stories about the contest’s interval act (to showcase the best of British culture across Europe, the organisers opted to use The Wombles), the presenter’s wardrobe malfunction and the role the contest played in the revolution that restored democracy to Portugal that year.

Moving on from the Dome, Morris’s tour weaves its way through the Laines, including a stop at the Run DMC mural I had often walked past but failed to investigate further, as well as the site of the branch of The Body Shop (where he revealed the slightly gross reason for the chain’s dark green livery). Next up is the Town Hall, where Morris contrasts the scenes of 1835, when men in Britain were last hanged for homosexual activity, to 2005, when the Town Hall celebrated the first civil partnerships in the UK.

Finishing off on Brighton beach, our guide chose not to talk about the soon-to-open i360, a popular decision among the assembled crowd, instead opting to focus on more of the interesting characters that have called Brighton their home over the years. He closed the tour as he had opened it, with the words of Quentin Crisp, “Brighton is not exactly England, as I have always felt at home here”.

Crisp’s words succinctly sum up the intentions of Morris’s eighty-minute amble across Brighton. It reveals how Brighton is not your typical city, it has a recent history which is in turns bizarre, smutty and alternative, but always unique. The Only in Brighton! tour tells some familiar stories and takes in the city’s main sights, but Morris’s stories and anecdotes ensure that Brightonians and visitors alike will discover some of the city’s long-hidden secrets.

Runs Fridays, Saturday and Sundays until the end of May as part of Brighton Fringe and then Fridays and Saturdays during the summer. 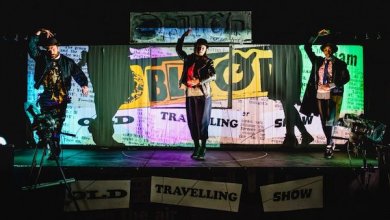