It should have been an ill omen that when this film was originally turned into a musical, it only ran for six weeks. At least songwriters Ken Hirsch and Robin Lerner had a go by giving it original songs – this new version ditches those songs in favour of a jukebox musical format, relying on the nostalgia of old eighties songs and the popularity of the original film without contributing anything of its own.

The group of trainees look more like a boyband, than a cohort of navy trainees. Rick Mayo (the role Richard Gere played in the film, played here by Jonny Fines) is an irritating brat who needs to grow up if he wants to become ‘an officer and a gentleman’. In Act 2, there is at least some backstory to explain why he is so annoying but Fines cannot overcome the two-dimensional nature of the role. It’s not his fault – there is little for an actor to do with this part and he doesn’t yet have the charm of Gere in order to coast by.

Jessica Daley as Lynette has the hardest part as the girl from the wrong side of the tracks who’s seeing Sid, one of the other trainees. She has to sing a misguidedly downbeat version of Material Girl, which doesn’t make any sense for her character as she’s not been shown as having materialistic interests before and has now been made unredeemable. Daley doesn’t bring the sympathy required to counterbalance Lynette’s selfishness.

Whilst Act 1 has very little in terms of plot, Act 2 packs in the melodrama. Writer Douglas Day Stewart’s narrative might work fine for the film, but could have dealt with more fleshing out for the theatre.

Probably due to the eighties hits being uniformly shoehorned in, the singing comes across as accomplished karaoke rather than reframing the songs as musical theatre numbers. The only song from the film soundtrack that is carried over is the iconic Up Where We Belong.

The cast look like they’re on a sinking ship, trying their best. The only performer that really stands out is Keisha Atwell as Seager, the only female trainee who wants to become the first woman to fly jets. It’s a minor role but the only sympathetic one and Atwell does act the songs and try to make some meaning out of them, futile as this is.

There’s a sprinkling of casual racism – Rick calls Seager ‘Ghetto Girl’ and his girlfriend, who is of Polish origin, ‘Polack Paula’. Perhaps this is an element best erased from the original.

Stereotypes abound – Rick and his friend Sid are troubled youths, the female characters over forty are brassy and washed up and the young women are seen as a potential trap for the trainees, with the trend that the women will deliberately get pregnant in order to keep their man. There are the sort of attitudes that feel more at home in the forties rather than the eighties.

It might be undemanding entertainment for ardent fans of the original, but really, An Officer and a Gentleman is best left in the past, where it belongs. 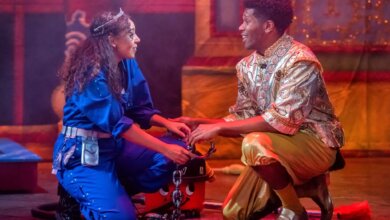 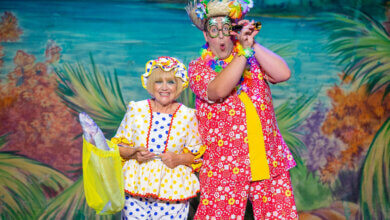 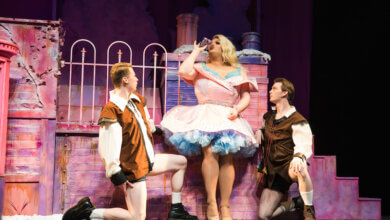 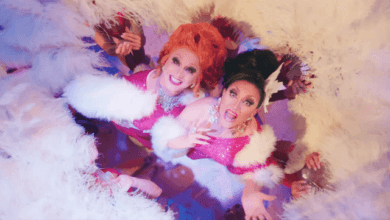