Supporting emerging artists is more important than ever and this year the opportunity to combine dance and film is presenting all kinds of possibilities. Dance-theatre company New Adventures, led by Matthew Bourne, has launched the Adventures in Film series, selecting three female choreographers to create a series of short films that focus on storytelling, each launched on successive weeks.

The first piece, Nostos, available from 20 November is the strongest, a 7-minute story about a couple exploring conflict and its aftermath, opening with a screen card asking ‘the war is over will they find peace?’ Choreographed by Tashu Chu who plays with the audience’s gendered expectations of fighting starts with a man unable to sleep and seemingly troubled by memories of a conflict, but Chu soon introduces a valuable ambiguity about who went to war.

With a throbbing score, the couple are transported to a warehouse where dancers Seren Williams and Mark Samaras perform solo pieces that change height and shape in a quick-slow tempo as Chu introduces long backward stretches into the routine. The choreography for Williams draws on contemporary dance while Samaras has more balletic, elongated shapes, backlit and beautifully shot by Oliver Bury as Samaras moves in shadow against the coloured smoke. Any sense of romance or intimacy are subsumed in feelings of desperation and loss.

Anjali Mahra’s Little Grasses Crack Through the Stone embarks on similar themes, taking its title and inspiration from a Sylvia Plath radio play. Released on 27 November and subtitled ‘three women, three stories, one lifetime’ Mahra’s piece moves between black and white and coloured frames to explore pregnancy, reproduction and possibly miscarriage as the three dancers – Charlie Broom, Cordelia Braithwaite and Estela Merlos – incorporate gestures that lead the camera towards their stomachs.

In fact, Mahra’s choreography focuses on hands and arms in particular as the women clutch their faces in despair. Yet, while the film covers several decades, elucidated by costume and styling, the horror-film influences with white masked figures and rooms soaked in red washes are a little tacky, distracting from, rather than reflecting, the notes of pain and desolation in the movement.

The final piece entitled Checkmate, released on 4 December, is choreographed by Monique Jones and has a street dance feel with the subheading ‘Two paths… one truth one man’s journey into the shadows’ as the protagonist is stalked or haunted by a shrouded figure. Jones’ composition uses a mirrored effect that places dancers Rhys Dennis and Ihsaan De Banya side-by-side or at different perspectives to create a sense of foreboding.

This ominous tone works through the movement as Jones creates the impression of possessed limbs and a loose upper body as though the dancer is controlled or moved through the air by exterior propulsion. Checkmate builds to a final confrontation on the chess board.

Adventures in Film is a valuable showcase for new talent. Directed by Adam Kes Hipkin, these three short films are full of atmosphere and ambition as well as an experiment in contained storytelling. These three choreographers have taken advantage of a unique digital opportunity, one that bodes well for long pieces when live performance returns.

Nostos available here from 20 November 2020, Little Grasses Crack Through The Stone on 27 November and Checkmate on 4 December 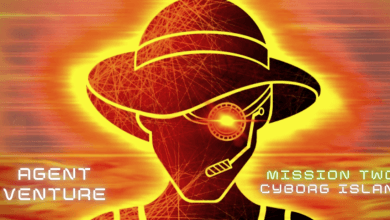 An American in Paris – The Shows Must Go On